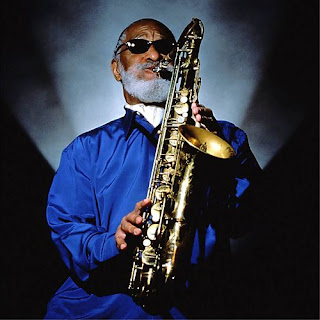 Witnessing a living legend can be a dicey proposition. Chuck Berry at 70 was an abomination, one of those Wish I Hadn't moments that destroyed whatever respect I once had for the cat. James Brown in his 60s made me wince and wonder about his knee pads.

So Sonny Rollins, the great tenor saxophonist whom I'd never seen, was a calculated risk. At 79, I should just be thankful to have witnessed him in the flesh. As he walked on the stage of the Bass Concert Hall on Sunday night with an uneasy, limping gait, the impression was underscore: after more than fifty years of jazz innovation, I was fortunate to experience a live Rollins performance before he exits Stage Left from this good earth.

But once his microphone was fixed five minutes into the first tune, age and time vanished, and performance he led his five piece group was just that: a performance of a great player essaying lush ballads, familiar ballads and even flashes of hard bop, no perspective required. His tone, his command, his presence, the players around him - everything was what great music should be. His brass counterpoint, trombonist Clifton Anderson (his nephew) provided the perfect counterpoint to Sonny and riffed improvisations as satisfying as the front man's. Guitarist Bobby Broom, who played his first gig with Sonny when he was just sixteen – at Town Hall, no less and also served briefly as Miles Davis’s guitarist, as the only guitarist to work in Art Blakey’s Jazz Messengers, and had a long stint with Dr. John (a tip of the Hatlo Hat to Matt Farmer), took his improvised leads on his Gibson to places where the bus doesn't run before bringing it all back to the basic groove. Rollins' showed his obvious delight, pushing him and urging him on, mouthing his approval whenever Brown's breaks moved him. The rhythm section of Bob Cranshaw's cool and understated bass, drummer Kobie Watson's expressive fills, and Victor See Yuan's smooth conga and percussive fills provided a solid foundation for all the riffs that flew from the players.

Rollins' improvisation was a joy to hear and see, working his tenor hard, extending a note while letting his right hand drop to his side, walking out to the plank where only Coltrane and Pharoah Sanders went with confidence, then downshifting to full and mellow clusters of notes that shimmered in their luxuriance on "They Say It's Wonderful" back to back with "My One and Only Love," both from the Johnny Hartman-John Coltrane studio collaborations in 1962-3.

Over the course of an hour and a half, the ensemble grooved and wailed steadily on a handful of tunes, earning a string of standing ovations at the completion of each. The only pause in the articulated groove was towards the end when Sonny limped to the microphone to growl out "AWWWW-STIN" in appreciation of the crowd, noting twice that the last time he'd passed through town was playing the Armadillo, which he pronounced with the kind of conviction you could tell he had a soft spot in his heart for place. The band closed with "Don't Stop The Carnival" a Rollins standard with it signature Second Line backbeat. While it was clear Rollins don't do no encores (at this stage of his career, encores are redundant and standing up for close to two hours on those old legs of his is no cakewalk), the audience was not going to let him go, so he gathered the group to walk out on stage one more time and wave, then walk off. The cheering didn't stop, so the group reluctantly came out for one more, with Sonny playing AND singing lead on a blues shuffle "It's a Lowdown Dirty Shame." The band played, departed, came out for one more wave at the crowd, and everybody went home tired and happy, the cats who made it all happen included.

The acoustics at the redone Bass were pretty sweet once the sax mic glitch was resolved.

And Hank Alrich of the Armadillo World Headquarters recalled the last time Sonny played Austin for me today, via email:

"The airplane had hit a huge air bump and he'd smacked his upper lip against solid structure and split it open. He played a long and amazing set with blood running down his sax, took a break and did another one. What a fucking hero.

"How the hell can Austin not bring back Sonny for all those goddamn years? That is beyond pathetic. Live music capitol, my ass."
Posted by Joe Nick Patoski at 8:27 AM

As we boomers move into our sixties, some of us gracefully, some of us not so, time grows short to appreciate ongoing musical contributions of a handful of artists who can still bring passion and mind-blowing creativity to projects, recorded and live in front of an audience. These performers give evidence that reaching the ripe old age of 70 and beyond does not signal the end to vitality and cultural relevance. I'll take a Sonny, Willie, Buddy, B.B., or Leonard over dozens of lip-synching youngsters clogging cyberspace with their vapid, instantly forgettable noodlings. As I turn 60 this year, I will take encouragement any where I can find it. Roll on, Sonny!!

Genius transcends age and it comes out of Rollins' horn like rare and exotic honey. This was a show that was not to be missed. I was transfixed and utterly blown away.

We're all very fortunate indeed to walk on planet Earth while Sonny Rollins is still around, ever creating and exploring...pushing and pulling. Always searching. That's Newk.

What a fine review. Wish I could've been there.

I still find it incomprehensible that until that show no one has booked Sonny into Austin since I did nearly three decades ago .

When newcomers wonder what is the big deal about the legend of Armadillo World Headquarters, why are artists who performed there still talking about a venue that last delivered a show on December 31, 1980, they might ask someone who was among those audients at Sonny's previous Austin appearance.

Community support among those who appreciate the art of music ran deep back in the day. Maybe that's because had it not been for AWHQ Sonny Rollins might have played Austin once in his lifetime, instead of twice. Had AWHQ been allowed to survive, Sonny would have played Austin at least fifteen times in the interval between 1981 and now.

Sonny said similar things in his Chronicle interview. "Austin and the Armadillo are always near to my heart."

There's a good reason, and it's all about Hank (And Eddie) letting half-crazy geniuses run free, in service of Art -- and having an ironclad ethos about Doing The Right Thing and Harming No One in the process.

AWHQ paid musicians union scale or better, even when it didn't have to. It fed road-weary musicians incredibly good made-from-scratch food. Whatever was on the artist's rider was done, period, and usually overdone. The "extra mile" was standard procedure there; I know, having been trained as an audio guy by Hank & Finney back in the day.

But my favorite aspect of that place was (at the time I worked there) Hank's eclectic booking prowess. What a wonderful place to become a sound guy.

Quite literally, a normal AWHQ work week might well have Zappa on Tuesday, The Stanley Brothers on Wednesday, Taj Mahal on Thursday, AC/DC on Friday, The Heath Brothers on Saturday, and the Austin Ballet Theater for a Sunday afternoon matinee.

I guess that people miss the place because there's been no replacement, three decades down the road. But, happily, many of us are still around, and are still colleagues, and are still creating.

It's wonderful when someone like Sonny Rollins comes through and has a kind memory. Van Morrison nailed it a couple of years ago when he was in town -- "This is Austin? You people have no idea what this Austin is missing."

I'm not sure he's right about AWHQ being his last gig here. I seem to remember passing up a chance to see him during my U. of Texas days and regretting it. That would have been late 1980s, maybe 1990. I remember a Daily Texan colleague who did attend returning from the show, pumping his fist, and yelling "yes! yes!" (Kind of like me after the Bass show!)

Perhaps I'm thinking of another jazz great, but I'm pretty sure it was him.

Anyhoo, your review is spot-on. I was mesmerized.

But, it's not quite true he hadn't played Austin since the Armadillo. I saw Rollins play an incredible show at the old "Third Coast" club in the strip mall at Lamar and Koenig... I want to say it was '80 or '81, might have been '82. I remember he did two shows and I just had bought tickets for the first one and it was so incredible that I wanted to stay for the second but they wouldn't let me...

I saw Sonny last year in Boston and it was equally transcendent, as he always is when he's "on".