I went and saw Alejandro tonight at the monthly music presentation at the . He had his guitarist Jeff Polkinghorn, cellist Brian Sandifer, and violinist Warren Hood as his band. Rolling out new songs along with a few chestnuts from the Al as Solo Act bag, the group was superb, on point, with at times going completely over the top. The precision of the unit flavored with Polkinghorn's flamenco flourishes was like a chamber quartet doing Beethoven back when Beethoven was still alive and rocking, both timeless and contemporary. At the conclusion, it was announced Al was the first to play the sanctuary, rather than the parish hall. The string thing and the partial preview of the new album have laid down a marker that will be difficult to reach.

Al told me afterwards Carrie Rodriguez would be joining band when they hit the road in two weeks, opening for the Dave Matthews Band. As the new album Real Animal looks back on a life of forty years of hard rockin’, the kid looks like he’s finally going to get the break of a lifetime. 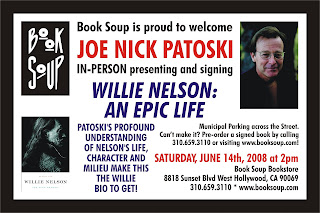 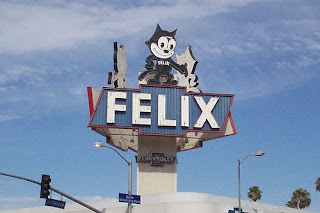 Y'all drop by and say Hidy.
Posted by Joe Nick Patoski at 5:38 PM No comments:

Three weeks since the book came out on April 21 and I'm still dizzy with all the good things flying about.

I'll be in Houston Thursday May15 at Brazos Books at 5 pm, then at Pete Mitchell's Under the Volcano from 7 pm until....
I'll be on KPFT FM 90.1 in Houston on Saturday morning May 17 at 10:30 on DJ Rick's Lone Star Jukebox, then swing over to Sig's Lagoon for another signing at 2 pm.

Next week on Tuesday, May 20 I'll be Dallas at the Borders on Preston Road for a signing at 7pm and
on Weds May 21 I'll be in Fort Worth at the Borders at the West Freeway and Hulen, across from Arlington Heights High School

and on Saturday, June 14 I'll be doing a reading and signing at Book Soup in Los Angeles.

The response has been very, very good. I couldn't ask for better reviews (except for two Yankee takes in Los Angeles and Washington and one very misguided cat from Dallas which isn't surprising in the eyes of this Fort Worther).
But it's the folks who know the character I've written about who have been the most positive. This one from Christina Fajardo came after I did two hours with Kevin Connor on Folkways on KUT-FM in Austin:

"I am setting here listening to you on KUT talking about a very good friend of mine, Willie Nelson. I have NEVER heard anyone in the press paint such a true and honestly sincere and kind picture of Willie. Thank you. Lana Nelson has been my best friend since she arrived from Nashville shortly after I arrived from Amarillo and became roommates many, many years ago. By the way, her ex-husband's name was Steve. (You and Kevin were trying to remember what his name was) Lana and I raised our children together and are now enjoying our grandchildren together.
"I laughed and I cried while listening to a story very dear and close to me. Thanks again and thank you for writing a wonderful book. You are a jewel."

Her response explains why I write.
Posted by Joe Nick Patoski at 4:29 PM 1 comment: