for more, check out conjuntoislife.com

At a fundraiser at Instituto Cultural de Mexico on Wednesday aimed at encouraging young Hispanics to consider the health profession as a career, a presentation called "Conjunto 101" was in no way as rudimentary as it sounded.

Author Joe Nick Patoski and photographer John Dyer entertained and educated a crowd of about 60 people with stories about their long involvement in the conjunto music scene.

Both men have documented, in their own ways, the pioneers of the Tex-Mexican folk music idiom. They aren't trespassing on the sacred bones of Narciso Martinez or Santiago Jimenez Sr.

"What are two gringos doing up here?" Patoski said in his opening remarks. The truth is he is among a handful of journalists giving the subject any respect.

Patoski has always hailed San Antonio as one of the great American cities. Tonight was no different. "San Antonio is one of the few places in the U.S. with a sense of place," Patoski said.

Dyer immediately began documenting conjunto when he moved to San Antonio in 1990. "It hit me that something had to be done," Dyer said.

About conjunto: "The sad thing is that most people that live outside of here have never even heard the word," Dyer added.

At the heart of conjunto is the accordion. Mexican musicians were drawn to the European instrument and the polkas played on it. They soon invented "musica alegre."

"It's the instrument that travels best," Patoski said. "Accordion, to me, is the national instrument of Texas. Conjunto is Texas specific.'"

Patoski shared many stories (he hung out with Esteban "Steve" Jordan" in Corpus Christi in 1977). Likewise, Dyer delighted the audience with a tale about Mingo Saldivar and how the musician, a former paratrooper, wanted to parachute into the conjunto festival at Rosedale Park.

Equally enlightening was the authentic and heartwarming music program at the top and end of the session.

"It's a labor of love," Lopez said about keeping traditions alive. "Conjunto music is not concert music, if you hear it, you want to dance." Sure enough, a couple danced.

Those interested in making a contribution to the scholarship fun of the nonprofit Mexican American Hispanic Physicians Association (MAHPA) may call (210) 340-8824 or contact online at www.mapa-sa.org.
Posted by Joe Nick Patoski at 8:14 AM No comments:

A Walk Through El West Side of San Antonio 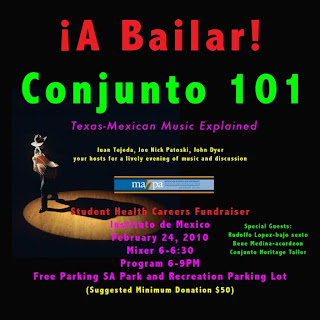 John's book Conjunto (University of Texas Press) is the definitive photo book of conjunto and Rudy and Bene are carrying on the tradition by teaching the music to kids in San Antonio.

Click on the headline to watch John's film tour of El West Side de San Anto.
Posted by Joe Nick Patoski at 11:08 AM No comments: 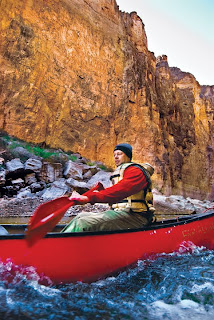 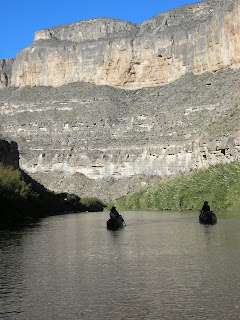 Someday, I hope to budget a month or so and do the whole 250-river-mile run from Colorado Canyon upstream of Lajitas to the Lower Canyon takeout near Dryden, as one man in a canoe told me he was doing when we met in Lajitas a few years back. Whether or not I take that on is almost beside the point. All I know is I’m way overdue for a Big Bend river trip. I get that feeling whenever the last trip ends. River running on the Rio Grande is a restorative I didn’t know I needed until the first time I did it. Now I can’t live without it.
Posted by Joe Nick Patoski at 10:23 AM No comments: