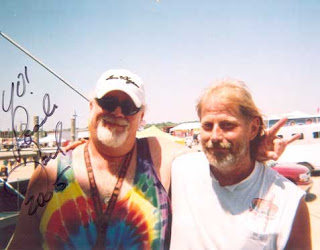 Poodie Locke passed away today. You might know him as the proprietor of Poodie's Hilltop Bar & Grill, or as the stage manager for Willie Nelson & Family.
I've known him as a larger than life figure, a wild man, the heart and soul of Willie's storied road crew, and a genuine friend.

He's was the Go To Guy for translation and better understanding when I was working on the Willie biography and the most fun cat I've ever played golf with, even thought I never picked up a club. He was also a hard working sumbitch, working the phones or his laptop even when he was having fun, always looking out for the boss and fronting for him without anyone ever realizing how smooth he was getting things done because his MO was total duct-tape.

Between him and his Momma Locke, who ran a boarding house, I realized Waco had more soul than most folks gave it credit for. He always knew where he came from, and would get the busses to stop for burgers at Cupp's whenever they were passing through.

He was the only roadie to have his own line of barbecue sauces. He was funny as all get-out, a great storyteller (oh, the time he talked about Larry Trader having told too many lies at the picnic at Spicewood, he had to be helicoptered away) and so real, I witnessed the alleged crazy man Johnny Knoxville kneel in fealty in Poodie's presence. Poodie was the real wild man. On the road, he was always plugged into the action, leading daytime tours of medical marijuana clinics (how he got access was a testament to his prowess and reputation) and to Alcatraz for a cadre of friends and followers when Willie did the Fillmore for a week a couple years back.

Last time I saw Poodie about three weeks ago, we talked about surviving. He told me he'd never been sick a day in his life. I asked him what his secret was. "Genes, I guess," he shrugged, before going about his business. I was going to catch up with him at Carl's on Saturday and when I couldn't swing that, I was going to drop by Spicewood and see him today. They say it was a heart attack. I'm glad it was quick. Poodie was too full of life to fade away slowly. He exited stage left at the top of his game, and at the top of his boss' game. I miss him already.

My condolences to Gloria (Mamma) Locke, his sister Cindy, his girlfriend Shaye, and all his family and all his friends around the world.

He will be buried Monday in Waco at Conally Compton Funeral Home.
There will be a Memorial Celebration in his Honor in Austin in a few weeks. Details to follow.
I'm sure there will be something scheduled at the Hilltop as well.

In the meantime, Clem passed this along to make us smile.


AND THIS FROM BUDROCK, WILLIE'S LIGHTING DIRECTOR AND POODIE'S BEST FRIEND:

It is tough losing your best friend. He was my Brother. 33 years side by side. Godfather of my kids. Nobody’s enemy.

I know it is harder for Shaye, Mama Locke, Cindy, and the rest of the Family.

My thoughts and prayers will be forever.

Rest in Peace Big Boy, you deserve it. There is not enough space for the words that you deserve. If you knew him, you know.

Now somebody else is gonna have to write the book.

You will NEVER be forgotten.

JNP~ Much obliged to you Nick for the nice tribute to Poodie.
I knew you would honor our old friend with some kind words that would help make us all feel a little bit better.
The loss of Poodie is just too great, I feel like we've all just been robbed.
I'm opening a fresh bottle of 'Old Whiskey River' Bourbon for the Big Guy right now. Here's a toast to Poodie, it's been an honor and a great privilege knowing you.

I'm so sad about this. I knew Poodie and Schroder in Austin when I worked at Moon Hill Management in the 70s. What characters they were and what great memories I have of Poodie.

I only met Poodie twice. The first time was when Willie toured down here in Australia in 1998 I think it was.

I had struck up an Internet friendship with Bobby Lemmons in the months leading up to Willie coming out here.

On the day Willie was to play in Melbourne, I fronted up to the place were the gig was to be held hours before it was to start in the hope of catching up with Bobby.

Well Bobby wasn't around, so I waltzed up to Poodie and said "G'day mate, do you know where Bobby is?"

Poodie said "who are you?". I told him who I was and what I was up to and he said he'd go find him for me.

Well Poodie came back and we chatted for a short while, he gave me one of his Hilltop Bar & Grille business cards which he had written on the back "If this guy ever turns up, give him a free beer"

Well 6 months later I did turn up. Poodie was working the bar at the time. I called him over, showed him the business card and he let out a great big laugh. And yes, I got the free beer.

Although I barely knew him, from that very time I spoke with him, I could tell he was a good bloke, friendly, happy and approachable.

I wrote this song in memory of Poodie:

That Very Sad Sixth Day Of May (At Poodie's Hilltop Roadhouse)

Bridge:
At the place where there's no bad days
Nobody knew exactly what to say
Me, I just hitchhiked away
On that very sad sixth day of May