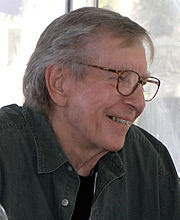 Bud Shrake had twenty years on me, and went to Paschal not Arlington Heights. He was already working at the Fort Worth Press on Jones Street in Hell's Half Acre when I was born. He was mentored by sportswriting legend Blackie Sherrod and had Dan Jenkins and Gary Jap Cartwright as mentors. He dated a stripper from Jack Ruby's club, covered the Dallas Cowboys at their birth, wrote for Sports Illustrated, was part of cafe society at Elaine's in New York where he drank and bullshitted with the leading literary lights of his day. He moved to Austin in 1968 before any cool did and dreamed up his own Texified cafe society with the Mad Dogs, a group that included Cartwright, writer Jan Reid, county commissioner Ann Richards, and music bard Jerry Jeff Walker. He was successful enough to fund the Armadillo World Headquarters with a few well-placed loans. He proceeded to write novels, ghost Willie Nelson's autobiography and partner with golf pro Harvey Penick on his Little Red Book of Golf. When Ann Richards was elected Governor of Texas, he was her First Gentleman and Significant Other. I don't think either of them ever got over the serendipity of it all.

A younger writer who moved to Austin to soak up the culture and write about it couldn't help but fall under Shrake's spell and influence. So it was with some trepidation that the same writer would approach Shrake to look through his papers to see how he wrote Willie's autobiography before contemplating writing his own biography of Willie. Shrake was nothing but encouraging. Still, there was more trepidation when the young writer asked Shrake if he could talk to him about the process and what he learned, and relief when Shrake invited him to coffee. At the end of a five hour coffee, interrupted by several breaks so one of two older men could go pee, the not-so-young-anymore writer heard nothing but encouraging words from the literary lion. That validation emboldened the not-so-young-anymore writer to take the leap and write a book like no other he'd written before. It might not have been Shrake-level literary brilliance, but it exceeded what the writer thought he had in him.

Texas writer had been a description reserved for early 20th century lights such as J. Frank Dobie and Walter Prescott Webb. Shrake embodied that term for late 20th century writers all the way to the here and now, defining the modern Texas and its culture better than anyone had before or has since. What stuck with one writer who came up in Fort Worth two decades after Shrake did was his ability to delineate between "hip" and "hep." Lots of places and lots of people flattered themselves by thinking they were "hip." Fort Worth, Shrake had observed many times, was never "hip." But it sure was "hep" - hepper than just about anywhere on earth. The images that Bud Shrake conjured with words - like when someone was thirsty they needed a "drank" and his description of the "perp walk" the police would make the hoodlums do for the edification of reporters every week - made it so.

So call him what you want. I'll just call him the heppest cat who put words on paper in this corner of the world.

Thanks for the wisdom and the advice.
Posted by Joe Nick Patoski at 7:58 AM