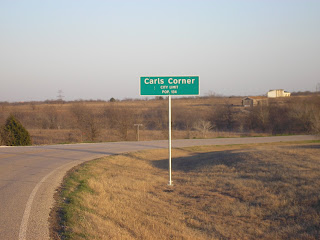 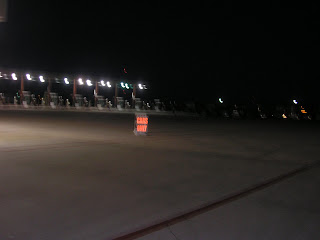 Right after Willie's Third of July Picnic at the world's most famous truck stop that is its own incorporated city, Carl's Corner was shut down to be retrofitted as a biodiesel refinery and futuristic truck stop. Too many false starts and delays later, the new Willie's Place at Carl's Corner, right on I35 East, a couple miles from the I 35 split at Hillsboro, reopened with a bang Tuesday night with a special concert by Willie and Asleep at the Wheel promoting their Willie and the Wheel western swing album.

The new Carl's (or Willie's, or whatever you want to call it) is nice and shiny with a bar and restaurant, a huge convenience store and gift shop that is the defacto home of Willie souvenirs, the Sirius XM studio home of Willie's Place where Dallas Wayne sits behind the mic Monday through Friday, and the 800 seat Willie's Place theater.

Carl Cornelius remains the Godfather of the truck stops and locals who grew up with Willie in nearby Abbott are frequent visitors. Carl's right hand man, Jeff Promes, who showed me around the work in progress a couple years ago when I was finishing the Willie book, was on hand for the reopening, putting out fires and admitting to me he didn't think he'd see the day. But here it is.

Trucks were filling up on BioWillie biodiesel and cars were gassing up on conventional fuel reasonably priced ($1.79 a gal for regular).

The chicken fried steak, burgers and salads all got my thumb's up, the photos on the wall are a wonderful tour of Willie's life, but it was the radio station and the concert hall that got me hot n bothered. I sat with Dallas on-air on Willie's Place, and then Dallas yielded his chair to Bill Mack, who will be on Willie's Place 11 to 2 daily, broadcasting from his home studio in Fort Worth with Sweet City. Bill proceeded to interview Kinky Friedman and Steve Fromholz, who provided the punch lines to all of Kinky's comments ("Drunk Driving" was priceless, Steve), before the concert was broadcast live. It will be aired again on Willie's Place radio Saturday at 2pm central.

I saw Jackie and Faye Dell Clements, Willie's childhood friends, and chatted with Wally Selman of the Texas Opry House. Wally told me that people ask him if all the stuff he told me for the book was true and he tells them Yes. Then he paused and said, 'It's a good thing I didn't tell you everything, or we'd both be dead.'
John Burnett, National Public Radio reporter and ace harmonica player, was on hand. He said he met Mickey Raphael for the first time earlier that evening and that they also shared a love of cycling, so I see a friendship in the making and possible coverage for Mickey's upcoming project, the Naked Willie album, which strips away all the Nashville sweetening on Willie's 60s vintage recordings, much like Naked Beatles stripped the Phil Spector bombast from Let It Be. Bob "Daddy-O" Wade, the artist who created the dancing frogs on the roof of Carl's, was on hand as were loads of fans from all over the state. The Kinkster said he drove his truck alone from Medina to make the show. 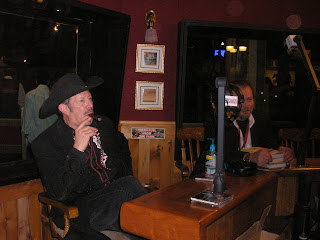 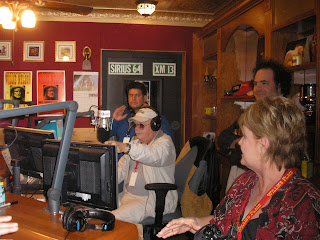 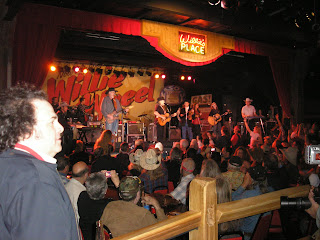 Ruby Jane proved herself to be a fiddler to watch, the clarinet and trumpet added a rich sheen of New Orleans jazz on top of the western swing base, Willie rose to the occasion with some fine guitar picking (playing songs not normally in his set list took him out of his comfort zone and he responded admirably). But I gotta say, I got off most on watching the interplay between Floyd Domino and Ray Benson. The Wheel's pianist and guitarist go back almost forty years and were the two players on stage most familiar with one another, effortlessly quote Thelonius Monk and other jazz cats into the swing tunes. 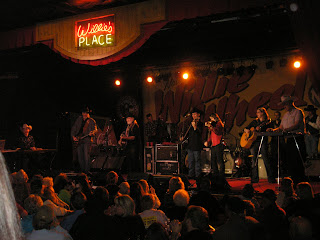 Before the show, I had the pleasure of introducing Floyd to Bill Mack, who is not only the world's greatest truckers' disc jockey but a hell of a songwriter. Bill's biggest hit was "Drinking Champagne" and Floyd told him it was an honor to record the song with George Strait in the studio. In other words, Floyd had a hand in playing the song that has earned Bill hundreds of thousands of dollars.

Carl's is going to book music on a regular basis. This weekend it's Darrell McCall, Mona McCall, Justin Trevino, Amber Digby, and the Heart of Texas Music revue from Brady, under the direction of Tracey Pitcox. Johnny Bush and Ray Price are coming soon. 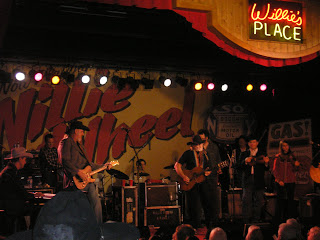 All of a sudden there's plenty of reasons to take a pause for the cause at the I 35 split, other than the Turkey Shop in Abbott.
Posted by Joe Nick Patoski at 12:16 PM

Joe Nick!
great to see you at Willie's Place the other night. If I ever hear you were riding on 35E and didn't stop to visit, I will hunt you down like a dog! You're the best, Dallas

Thanks for the great review and the insight.

Thanks for the review and great pictures, Joe Nick

My wife and I ate at Willie's Place last Sunday. We orderd the chicken fried steak, because we were told "it is to die for." I was disappointed. Good chicken fried steak lovers know that the batter doesn't separate from the steak when you cut a bite. The steak was round steak but it was tough and needed tenderizing. The proportions were huge and the gravy tasteful. But come on, Willie, you grew up in Abbott and know the quality of chicken fried steak we used to get at the Eagle Cafe and Albert's and Sulak's in West. Give us something to drive to Willie's Place for. The food is not the quality of Willie's music or the place he's built at Carl's Corner.

AMEN to that Harry, my biker friend and I were at Willies Place last Thursday and had the infamous chicken fried steak and it was HORRIBLE! It was exactly as you described. I would not recommend this place for food.

We just returned from a 5 week road trip that took us up I35. I've been listening to Willie's Place for over a year and decided to stop in for breakfast. What a disappointment! It wasn't anything like I imagined after to listening on the radio. We expected to find a lot of activity and people. There was only 8 to 10 of us in the restaurant. The satelite radio wasn't even on. There was some old western movie on TV. We each had a egg, sausage, biscuit and gravey breakfast. It was some of the thinnest gravey we've ever seen. The highlight of the stop was the waitress. You couldn't ask for any better friendly out going person. Also I'm finding myself not listening to Willie's Place as much as I once did because I don't like the new personalities and the music is too much of the same over and over.

What a disappointment! We came down from Illinois for the 1st Halloween Party. Less that 15 people showed up and the band was some head bangin rock band! NO COUNTRY music and NO Texas beer in the theater.DUH? We left after we found out it was a rock band.
We also found out the XM station is on automatic, nobody there. They broadcast from remote locations. Everything at Willies is PHONEY!
Derek the doorman is an ass!
Don't waste your time.....what a joke.

BooHoo is all I can say about the first Boo Night at Willie's Place. Missed the fact that there was a going be a rock band. A rock band at Willie Nelson place - really? Durk at the door was a jurk! Won't go back .... not even if Willie was there.

Hahaha... what a bunch of babies! The Halloween show was a one-time deal to give the regulars at Willie's Place a little change of pace... it was Halloween after all!

By the way, Dennis, try turning on your radio before you make comments about the XM booth. Dallas Wayne broadcasts EVERY WEEKDAY from 2pm-6pm from Willie's Place Theater. Just ask any of the hundreds of fans who see and talk to him in person every week! What did you think, he'd be there 24 hours a day? Get real, man.

You have only yourself to blame for not checking the schedule if you wanted Texas country music. Maybe you should have come down on Dec 16th instead: Willie Nelson, Ray Price, Billie Joe Shaver, Paula Nelson, Billy Bob Thornton... On second thought, it's a good thing you didn't, since it SOLD OUT right after going on sale. Guess your business isn't all that important after all, eh Dennis?

Willie's Place sees thousands of visitors every week, maybe ask one of them about their experience instead of listening to the negative jokers in these comments!