The only conjunto radio station in the nation, KEDA AM 1540, San Antonio, aka Radio Jalapeno had a fire and will hold a fundraiser at the station Sunday with chicken, rice and beans, music, and a whole lotta good vibes. 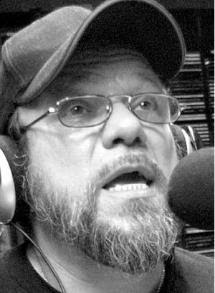 Since its inception in March 1966, KEDA-AM has been a community radio station. First and foremost, that was Manuel Davila Sr.'s vision of the down-home venture — along with the renegade “Radio Jalapeño” mix of rock 'n' soul, conjunto, Tejano, R&B and oldies.

Sure enough, tune in on any given day or night and one will likely hear radio personality Ricky “Güero Polkas” Davila doing live and pretaped voiceover commercials and public service announcements for everything under the sun while spinning Freddy Fender, Flaco Jimenez, Los Padrinos and Bo Diddley, as well as obscure local heroes.

His is a fabled, soulful show in the Wolfman Jack and Howlin' Rooster tradition (a bit of that excitement was captured in David Byrne's 1986 film “True Stories”).

Now, KEDA, the first Mexican American-owned station, is asking for the community's help.

On Feb. 10, a fire knocked out its transmitter tower. It was the first time the 5,000-watt station had ever gone silent, said program director Albert Davila.

The radio station was running at 25 percent power last week and is back up to 50 percent.

Sunday, KEDA is organizing a fundraiser on its parking lot, where the gang will be selling barbecue chicken and sausage plates with all the trimmings for $5. The party at 501 South Flores St. runs from 11 a.m.-5 p.m.

But organizers will surely welcome larger donations. They need to raise in the neighborhood of $15,000 for the cost of the transmitter parts.

“I walked into the station today, and a guy walked up to me and hands me a hundred bucks,” said Albert Davila. “I've gotten a lot of comments like no other station plays the local and regional artists like we do, and if we lose KEDA we're all going to be in trouble.”

Davila said surprises are in store, including a car show, and a jam session is possible.

“It's a static-y radio station, but it's no lie that Radio Jalapeño is the only conjunto radio station in the nation and has done more to amplify conjunto music not only in San Antonio and South Texas, but throughout the world.”

Patoski also called KEDA the voice of the community.

“Once upon a time, stations like this were in every city and served their audience. Now it's an anachronism in the age of corporate radio, and you can hear the difference,” he said.

The only reason I knew the story ran was this nice note from Roy Davila of the Davila family:

"Joe, thank You on behalf of the Davila Family. Davila Broadcasting Keda Radio AM ( American-Mexican Radio ). We have always consider You a Friend and Compadre. Gracias Carnal for Your kind words. Roy Davila "
Posted by Joe Nick Patoski at 2:33 PM