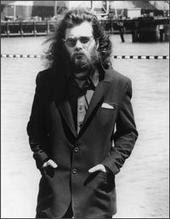 I wasn't there, but my friendly spy attended last night's Austin City Limits taping of Roky Erickson backed by an all-star band including Billy F. Gibbons on ZZ Top. The pairing marked the reunification of the Houston psychedelic scene of the mid-Sixties, which predated the Summer of Love in San Francisco by two years. At that time, Billy F. led the Moving Sidewalks who opened shows for Jimi Hendrix' first major tour of the United States and Roky was lead yowler of the 13th Floor Elevators who recorded for Houston's International Artists label.

Since then, Roky's been through hell and back via electric shock therapy, time in the Rusk nuthouse, bouts with drugs, and serial episodes of people trying to "save" him. He's better now. Billy F. went through shit too. He formed ZZ Top which became the Biggest Rock Band ever from Texas at the price of being "guided" by Bill Ham who in the interest of burnishing mystique, prevented Billy (and Frank and Dusty) from sitting in with other musicians or being in public in any form or fashion other than That Lil' Ole Band from Texas. That clampdown eventually turned Billy F. into this era's Howard Hughes.

Now that Roky's better and Billy and Bill Ham have parted ways, we have a moment like this. Unfortunately, Billy was given few opportunities to solo behind Roky due to Cam King's guitar-hogging (hey, I'm repeating what I heard) but when he did, the ol ACL studio 5A shook.

Texas psychedelic music is back (it really never went away) , and pretty soon, you'll be able to see and hear proof of that on TV.
Posted by Joe Nick Patoski at 11:13 AM