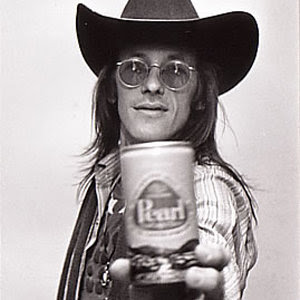 Incredibly, it's been 10 years since Doug Sahm died. This is a piece I wrote for the 2008 Pop Music conference, held annually at the Experience Music Project in Seattle:

In Les Blank's 1976 documentary, "Chulas Fronteras," Rumel Fuentes--a singer/songwriter from South Texas--performs the song "Chicano" with Los Pinguinos del Norte. "Chicano" was the quintessential anthem in the 1970s for Mexican-Americans who resisted that hyphenated label in favor of an identity that reflected their political and cultural awakening. The song boldly asserted that this new generation would not be subservient or passive; they would stake their claim to America and call on their cultural pride to carry them through.

The odd thing though is that "Chicano" was not written by Fuentes, nor by Los Pinguinos, nor by any other Chicano artist. It was written by Doug Sahm, aka child steel guitar prodigy Little Doug, aka Sir Douglas of the Sir Douglas Qunitet, aka C&W singer Wayne Douglas, and--most importantly here--aka Tex-Mex vato loco Doug Saldaña.

How could a white boy--a self-described "honky"--have the audacity to write "Chicano"? Well, you have to know a little bit about Doug Sahm and the place he came from. He was born in San Antonio (also my hometown) in 1941. The city was then about evenly split between Anglos and Mexican-Americans, with a smattering of Blacks. Sahm grew up on the East Side, where most of the Blacks lived, and in his teens would sneak into nightclubs to watch and learn from the likes of T-Bone Walker. But San Antonio was historically, and remains at its essence, a brown town. Doug loved it. He was a sponge who took it all in, and he was a chameleon who thought it perfectly natural to change colors when it suited him musically.

The evolution of the Sir Douglas Quintet is well known. In the wake of the British Invasion of 1964, renegade Texas music producer Huey Meaux convinced Sahm that his band should take on a British persona. With their tailored, Carnaby Street-style suits and Beatles haircuts, they certainly looked the part. But their breakout hit, 1965's "She's About a Mover," was pure Tex-Mex. It was essentially a polka, with Augie Meyer's Vox organ subbing for an accordion. But Texas wasn't a friendly place for hippie-types, and after a drug bust--for which they were eventually cleared--the band headed for California.

Sahm continued to pursue his eclectic musical taste--country, blues, jazz--in a series of albums that also produced the Quintet's other big hit, "Mendocino." While in California, Doug spent some time around the farmworkers' movement in Monterey County, and I can only surmise that this may have partly inspired him to write "Chicano."

But after an exile of five years, Sahm was ready to go home. By spring of 1971 he had returned to San Antonio, where Chet Flippo came to profile him for Rolling Stone. As Sahm drove around the Mexican part of town--he told the writer: "Man, the West side is so beautiful, so soulful. There's 400,000 people on the West side, man, the original soul Mexican thing of the world. See, the West side is pure Chicano...I'm into Mexican music very heavily. I'm gettin' me a bajo sexto, a Mexican 12-string." But the story concluded with Sahm telling Flippo that he was thinking about recording a country album in Nashville: "Maybe then people would see that I'm really just a hillbilly with long hair."

Sahm, however, would remain in Texas to record another album with the Quintet. Fully embracing his Chicano persona, Sahm titled the album "The Return of Doug Saldaña"--a nickname reportedly bestowed upon him by some Chicano friends. As Ed Ward wrote in the liner notes to the 2002 release of the album on CD: "At this point, he had completely identified with the Chicanos he lived with...And to those who didn't know him or understand him, this was embarrassing, but it was entirely in character."

Sahm soon moved to Austin, where the "Cosmic Cowboy" era was blooming. Willie Nelson had just moved there from Nashville, and in the Summer of 1972, the legendary producer Jerry Wexler came looking for Sahm. As Wexler told Flippo: "He's like the Rosetta Stone of Southern music."

The album, released early in 1973 and titled "Doug Sahm and Band," was a typically eclectic Sahm affair, with the tracks including the country classic "Is Anybody Going to San Antone?"; Dylan's "Wallflower"; T-Bone Walker's "Papa Ain't Salty"; Willie Nelson's "Me and Paul," and several Sahm originals.

Several leftovers from those sessions made it onto Sahm's second--and final--album for Atlantic. Titled "Texas Tornado," and also released in 1973, the album included "Chicano." A classic Tex-Mex polka, the song featured the Sir Douglas musicians, plus--incongruously--Dr. John on piano and David Bromberg on steel guitar. Ed Ward wrote that, with this song, Sahm would "completely step over the line...he saw [it] as an anthem for the Chicano movement and nearly everyone else saw it as the worst gaffe he'd ever committed in public. This rankled him for years." Ward said that Sahm later told him: "People still get down on me for that song, but you know what? The guy who works on my car, little Chicano dude down in San Antonio, he told me, 'Doug, that's my favorite song of yours. It makes me proud and I sing it to myself a lot.' See, people just don't understand!"

Sahm's vindication would come with Rumel Fuentes' rendition of "Chicano." But Fuentes would improve on the original. Sahm's version was just one verse and the chorus, each of them repeated once. Fuentes made some subtle but powerful lyric changes, and he added two verses and also translated the chorus into Spanish, all with clever bilingual wordplay.

In Fuentes' first new verse he sings: "Chicano, soy Chicano, I can fly just as high as I want to / Some people call me violent 'cause I'm no longer the silent, pobrecito Mexicano." And then he turned the chorus from "All across the U.S.A. / I just woke up and say Chicano, soy Chicano..." to this: "Todo el mundo lo sabrá / y este vato les dirá / Chicano, soy Chicano..." ("All the world will know it / and this guy will tell them / I'm Chicano." By the way--making those lines rhyme in the future tense is a pretty good trick.) Finally, Fuentes finishes with a new verse in Spanish: "Chicano, soy Chicano, soy café, tengo orgullo, y yo sé que yo lo voy hacer / Algunos me dicen hippie, otros me dicen caifan, pero yo sólo sé que soy puro Mex-i-can." ("...I'm brown and proud and I know I'm going to make it / Some people call me hippie or bum, but I know I'm pure Mexican."

Given those improvements, as far as I'm concerned, Fuentes has just as much claim to the song as Sahm. But I can't ask Rumel how he feels about it because he's gone to that great big cantina in el cielo. And I can't ask Doug how he feels because he's gone to that great big honky tonk in the sky, where there's an endless supply of Pearl beer and mota from Michoacan. But, in the end, Rumel would not have been inspired to improve upon the original unless there had been an original. And Doug Sahm, my friends, was an original.

Download 09 Chicano (Fuentes)
Posted by Joe Nick Patoski at 7:03 AM