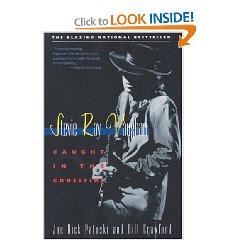 A head's up to all my friends in Far West Texas:

$4 museum members, $8 nonmembers – Seating is limited.
This is the fourth and final lecture the El Paso Museum of History is hosting on Texas Music History.

Joe Nick Patoski has been writing about Texas and Texans for more than 35 years. In addition to biographies on Stevie Ray Vaughan, Selena, and Willie Nelson, he has written the text to the books Texas Mountains, Texas Coast, Big Bend National Park, and Conjunto. A former staff writer for Texas Monthly magazine, his cover story in the August edition of Texas Parks & Wildlife magazine details his killer hike along the ridge of the Franklin Mountains a year ago.
Patoski’s lecture will explain how and why Vaughan became the legend he is today, leading a brief journey through the blues scenes in Dallas and Fort Worth in the 1960s and in Austin in the 1970s that informed Vaughan and an entire generation of players. Most went to school in the bad parts of town to witness bluesmen like Freddy King and Lightnin’ Hopkins in their element, learning by example. But the opening of Antone’s Home of the Blues nightclub in the mid 1970s changed everything. Clifford Antone elevated blues into a fine art in Austin and his venue became the incubator for SRV and Double Trouble, Jimmie Vaughan and the Fabulous Thunderbirds, Lou Ann Barton, Angela Strehli, Marcia Ball, and many others.

When do you give this talk to us Austinites?

BlueHost is ultimately one of the best hosting company with plans for any hosting requirements.