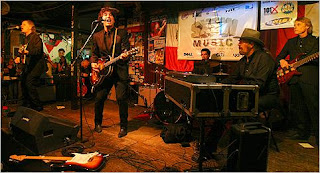 The death of Douglas Wayne Sahm in 1999 marked the end of what I'd known as the San Antonio Sound, defined by those few pop hits that managed to emerge from San Antonio's spicy menudo of musical exotica created by blacks, whites and browns in the Alamo City — songs like Sunny and the Sunliners' romantic teen anthems “Talk to Me” and “Put Me in Jail,” Rene y Rene's “Lo Mucho Que Te Quiero,” the Sunglows' peppy “Peanut (La Cacahuata),” the Sir Douglas Quintet's “She's About a Mover” and “Mendocino,” Doug Sahm's “Chicano” and Toby Beau's “My Angel Baby” all the way to the Texas Tornados' version of Augie Meyers' “Hey Baby (Ke Pa So).”

They swing, they sway, the rhythm's just right, the groove's on and the words are sincere.

When Doug died, I thought all that went with him. The one exception was “San Quilmas,” the album released by Sahm's old big band the West Side Horns and featuring the last significant recordings of the sax genius Rocky Morales, who honked and buzzed and also sang inspiring vocals on two Jimmy Reed covers that came close to replicating the master himself. So the presence of Augie Meyers and his magic Vox organ were reasons enough to be curious about “La Conquistadora,” the new album by the Krayolas, whom I'd mainly regarded as a Beatles band — not that there's anything wrong with that. Embracing the British sound and look worked for Doug Sahm and Augie Meyers and the Sir Douglas Quintet 40 years ago, even though their sound was really S.A. homeboy.

It turns out that's pretty much the story of Hector Saldaña (whose day job is Express-News staff writer), his brother David, and their band, too. Their sharp matching suits are classic Carnaby Street look, and their basic two-guitars-bass-drums setup is straight out of the British Invasion. The addition of Augie merely confirms the suspicion. The curtain is pulled back and the truth revealed. The Beatles bit masked their S.A. roots. Listen close enough, and the Krayolas could be grandsons of Sonny Ace y Los Twisters, Rudy and the Reno Bops and Charlie and the Jives. And then some.

With power-chord chunklets crashing into accordion and bajo sexto riffs and an obligatory blues shuffle thrown in just because, a knowing ear can't help but recognize them as Nowhere Else local boys. But you don't have to appreciate that to dig the Krayolas' chili. Pure and simple, the Krayolas crank out some of the finest pop songs since the Raspberries and Cheap Trick, their lyrical depth mostly flying under the radar because the music is so alegre.

Plus they know how to choose their covers. One of the two songs Hector Saldaña didn't write — Augie Meyers' “Little Fox” — is so hooky and insanely upbeat, it is guaranteed to be etched into your subconscious, whether you want it or not, if you play it 10 times in a row. Back in the day, that would have translated into a sure Top 40 hit. These days, enjoying it for what it is — a great song and part of the best contribution to that storied San Antonio Sound that's come along in years — is pleasure enough.