While heading south on US 281 to the Valley a couple weeks ago, pondering turning off to drive to the shrine of noted healer Don Pedro Jaramillo to get all the God on my side that I can, the Texas Fred Zydeco Show on XM Channel 12 convinced me to keep moving. Zydeco had already saved me. Say what you will about the declining state of folk music in . The folks making Zydeco, that gumbo of traditional white Cajun and black Creole sounds made modern for the young people, are on fire with their skills for philosophizing while maintaining a hepped up rhythm meant for booty-shaking and other traditional forms of physical expression.

Over the course of thirty minutes, Texas Fred had me barking. Actually, it was Chubby Carrier, covering “Dog Hill” the song made famous by Boozoo Chavis, singing about going to a place “where the pretty women at” interspersing the verses with carnal “woof-woof”s - Zydeco women love that. Then it was Nathan Williams’ declaration of wisdom, “I Was Born at Night (But I Wasn’t Born Last Night)” making sure no woman was going to pull one on him as he squeezed his box while the rest of the Zydeco Cha Chas rolled behind him, the Zydeco Force doing some more barking on “Shaggy Dog Two-Step,” Beau Jocque rolling around in the gutter doing his best Howlin’ Wolf asking “Woman, Why You Wanna Drive Me Crazy?” Somewhere inbetween Step Rideau and his Zydeco Outlaws burned raw heat, showing why he’s got the stuff to be invoked by UGK, the lords of Texas rap, representing Port Arthur and all of the greater H-Town megapolis. 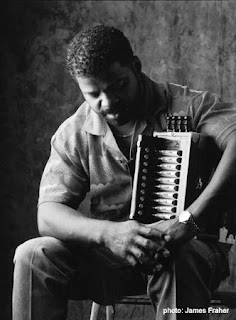 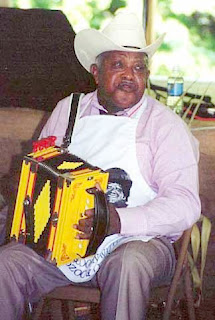 Boozoo Chavis (photo by Michelle Leder, taken two days before his death in Austin in 2001)

Posted by Joe Nick Patoski at 9:21 AM