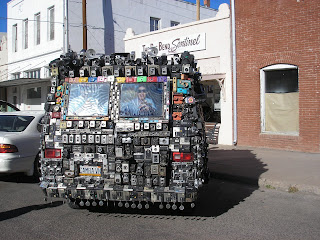 Last Thursday afternoon, while hanging out across the street on Highland Avenue with my friends Boyd and Robert, we saw a '72 Dodge van covered with 1,705 cameras pull up to the offices of the Big Bend Sentinel which Robert edits. So we walked over to talk to a man and a woman who emerged from the van. 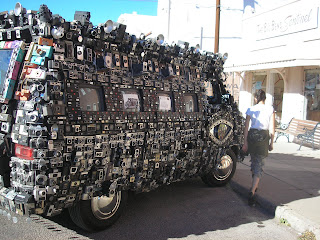 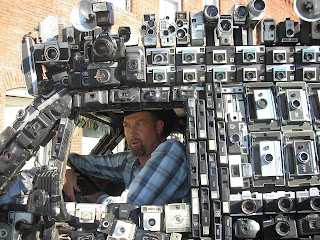 He started talking about wanting to make Marfa a satellite city for the big Art Car parade which is held in Houston every April so Art Cartisans in the region could caravan to H-Town. After talking about Art Cars, which the man seemed to know a lot about, I asked if he knew Harrod Blank. 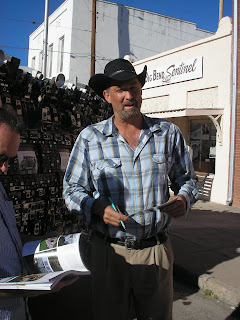 "I'm Harrod Blank," he replied, setting off a long conversation about Art Cars, his film Wild Wheels, his book, Art Cars, his writings on various subjects including Burning Man, and his father, the documentary filmmaker Les Blank, for whom my wife, Kris Cummings, worked back in 1978 on the film "Always For Pleasure" that celebrated New Orleans music. Harrod, who lives behind his father's house in Berkeley, CA is moving to Douglas, Arizona. Why? "Because I can afford to live there," he said.

Robert took photos of the couple and the vehicle for the newspaper. 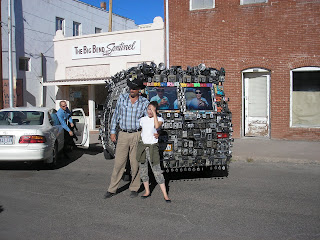 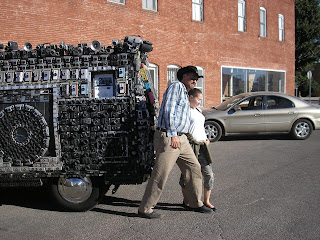 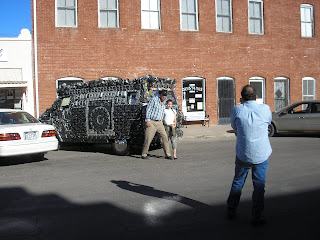 We walked around the car and checked out the cameras, most of which are functional, Harrod said. 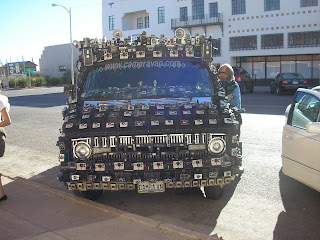 Boyd poked his nose inside the driver's window. 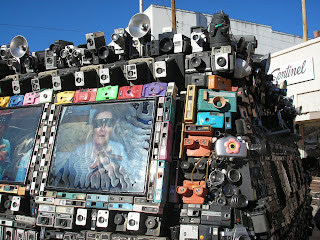 Harrod sold us postcards of his art before going on his way. Check out his wonderful world at www.harrodblank.com
Posted by Joe Nick Patoski at 2:04 PM