The Big Squeeze/Accordion Kings and Queens This Saturday 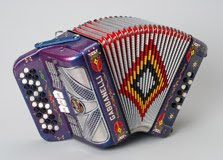 THE BIG SQUEEZE
The 21st annual Accordion Kings and Queens Festival includes the finals of the Big Squeeze contest and performances by stars of the accordion world.
• When: 6:30-11 p.m. Saturday. An accordion jam open to the public starts at 5:30 p.m. The competition is held after the jam.
• Where: Miller Outdoor Theatre, 6000 Hermann Park Drive in Houston
CONTEST
• Who: Star performers include Albert Zamora y Talento, Leroy Thomas & the Zydeco Roadrunners, Eva Ybarra and the Texas Legacy Czech Band
• Cost: Free
• Sponsored by: Texas Folklife, an Austin-based nonprofit organization that presents and preserves Texas culture
• Information: texasfolklife.org or 512-441-9255 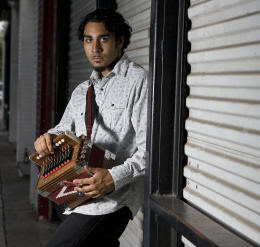 Accordion player Ruben Moreno is a finalist in the Big Squeeze Competition put on by Texas Folklife.

When it came to showcasing his accordion chops for the judges, Ruben Moreno decided to stick with the classics.

He picked out a zydeco favorite by the late legend Boozoo Chavis and a Creole number to perform in the fourth annual Big Squeeze competition, a Texas-wide showdown of young accordion talent.

“I hear something like that, something I know is traditional, and it just reels me in,” Moreno said.

“There is hope in keeping the tradition going on accordion,” he added.

The Houston native hopes to turn tradition into a career in music and one day play his own zydeco-infused melodies in great concert venues. Moreno, 20, takes the stage Saturday at Miller Outdoor Theatre in Houston with aspiring accordion players from Humble, Dallas and San Antonio for the finals of the competition, part of Texas Folklife's annual Accordion Kings and Queens Festival.

The winner takes home $1,000, a new accordion, a recording session at SugarHill Recording Studios in Houston and career support.

For Keyun Dickson of Humble, winning the competition would give him bragging rights as a new “accordion king.”

“They don't have to give me anything,” he joked. “I just want the name.”

The festival and competition are a showcase for young talent. But they also shine a spotlight on the accordion, which writer Joe Nick Patoski calls the “national instrument of Texas.”

“There is no single instrument, including the guitar, that covers so many musical styles as lead instrument,” said Patoski, author of books on Texas icons Willie Nelson and Selena.

The instrument has found its way into Texas roots music ranging from the countrified sounds of the Tex-Czech polkas to zydeco, conjunto and some Tejano, Patoski said.

The accordion came to this continent with European immigrants in the 19th century, though there is discussion about whether it made its way to Texas through Mexico or ports such as Galveston, Patoski said.

Once it arrived, the sound grabbed attention in Texas with Czech, German and Polish polkas re-imagined for a new world. It squeezed its way into the music of Cajun and Creole people from Louisiana and the Texas-Mexican sounds of conjunto.

“With all our cultures, we live our separate lives,” Patoski said. “Music is where we intersect. We've been stealing from one another musically since those immigrants arrived with the accordion.”

The 19-year-old from San Antonio grew up around conjunto music at home and at local festivals. But he didn't take up the instrument until he was 14.

“At first I wasn't really interested in it,” said Zamora, whose family moved to Texas when he was 5. “Then I started seeing the cultural meaning of it. It comes from where I was born, Mexico, and all that.”

Zamora plays conjunto classics such as Idalia, which is one of the pieces he will perform Saturday. He also performs with his mother and father at festivals in their band, called the Zamora Family.

Dickson was introduced to the accordion by his mother and grandmother.

But for him, the music was zydeco, and he started playing it at 3 and taught himself by listening to recordings by his accordion hero, Houston player Step Rideau.

At 12, he started a band called Keyun and the Zydeco Masters that now performs regularly at jazz cafes and Cajun restaurants.

Though he loves the music, playing the accordion has other benefits for an 18-year-old.

“I like all the girls that come out to this stuff,” he said.

tara.dooley@chron.com
Posted by Joe Nick Patoski at 8:13 AM