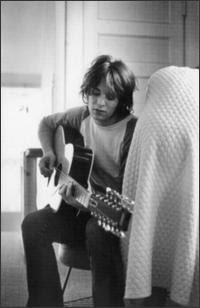 Everyone has a Chilton story. It was 1975 and I was hanging my hat in Austin, with a sweet red head named Maggie Mae, about 3 blocks off of S. Congress near the Continental club. We were sitting around listening to KOKE FM, and this killer playlist that went something like, Dylan's " When dogs run free" and Peter Tosh's " Steppin Razor" and then the "The Ballad of el Goodo" from #1 record. I thought it was the Byrds/ McGuinn/Hillman, but something told me it wasn't. It was clearly a continuation and a departure simultaneously.

Im not sure of the time of day or night, as was to be expected in those days. I cannot even remember who was spinning records, it could have been Candy Kicker, Dr.Dinger, the Perfesser or Joe Nick Potoski ( Joe Nick has written a biography on Willie Nelson that is sensational and a real schooling on country music in general and Tx music specifically), Anyway, I remember waiting patiently for the playlist to be announced as was customary in those days. It was Big Star and I was dead set on finding it at the record store- nada zero copies anywhere.

I followed Chilton / Big Star off and on over the ensuing years and fell in love with "Radio city" and especially " Sister lovers". I remember a huge boost in popularity in the 80's after Ivo's 4AD compilation's ("This mortal coil/It'll end in tears") with reinvigoration of versions of Chilton's "Kangaroo" and "Holocaust" 1984 ( covered by Howard Devoto/ Buzzcocks/Magazine) along with Bell's "I am the cosmos" and "You and your sister"( kin Deal) from the later "This Mortal Coil /Blood" 1991.

On a side note, a great version of Rodney Crowell's "Till i gain control again" and Spirit's "Natures Way" are also on "This Mortal Coil / Blood" - worth a listen.

I just came across some tangentially related esoteria. The SF / TX connection is always an interesting musical journey. I knew about these guys, but never really investigated their music, On the heels of the 13th floor elevators, and almost contemporaries of Chilton was Cold Sun, they were making some great psychedellia with autoharp/ harmonica combo as a lead instrument. ( a harmonica brace fastened to the autoharp)

“There was a mythical Austin that is the root of all subsequent myths about it being such a ‘cool place’. That time was so magical and wondrous that the memory of it still fuels the fake scenes there, today.” Patrick Lundborg, 2003
Posted by Joe Nick Patoski at 8:01 AM

I've been following Chilton's career since 1978 and have accumulated some interesting unreleased odds and ends. One of which I'm looking at right now--this live interview/performance show Alex did on KUT Austin in 1978. Alex sounds pretty loose and has some girls in the studio with him, causing trouble and making jokes. This was right around the time Alex was making "Like Flies on Sherbert" and he performs the Carter Family's "No More the Moon Shines on Lorena" from that album and makes jokes about Maybelle Carter's "incestuous East Tennessee family" and so forth. Sounds like he was having a good time in, as he calls it, "Ostentatious Austin." A nice artifact. Best, Edd Hurt, Nashville (equally ostentatious, of course)

It's interesting to me that when the history of Austin music is bantered about like this by the music pundits, not much is ever said about Mike Murphey and Jerry Jeff, though they, and the Interchangeable Lost Gonzo Band, were tearin' it UP all over the USA as unofficial Austin Ambassadors of Cosmicdom. Maybe it's because we never played Austin all that much,...but only lived here? In any case, I never played a show with any of 'em anywhere that wasn't packed to the gills and folks weren't hangin' from the rafters, even in...New York City! And they were releasing nationally released records and selling pretty dang well too. Pre Willie! If anybody helped the Austin scene to flourish and point the world's attention to it, it seems these boys had a big hand in it, didn't they? Why the cold shoulder?

I've noted the JJW and Murphey impact in both the Stevie Ray and Willie books. Both acts were at the top of the heap in Austin (along with Willis Alan Ramsey) when Willie and Doug were just getting their game on.