For his next book, Dallas, the Cowboys (and even the Texans) 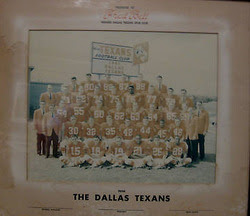 from Robert Wilonsky's Unfair Park book club blog in the Dallas Observer (full story and comments if you link on the headline).

This morning, Friend of Unfair Park PeterK sent me the photo at right -- quite the bargain on eBay, especially since it's got Hall of Famer Hank Stram's signature and remains at the low, low price of $9.95 thus far. I then forwarded it to my old friend and Stevie Ray Vaughan and Willie Nelson biographer Joe Nick Patoski, since he just so happens to be working on a book about the Dallas Texans, the Dallas Cowboys and Dallas itself.

"It breaks my heart to see that picture and think of the game that wasn't," says the former Texas Monthly writer, who left the magazine in 2003 after 18 years on staff. "The Texas death match, loser leaves town."

Joe Nick's latest tome doesn't have a title yet, only a publisher (Little, Brown again) and a due date (November). He's been in and out of town in recent months interviewing, well, you name it -- from the great Abner Haynes to Mike Rhyner. The book spans 1960 to 1979 and covers everything: "race, politics, assassinations, high school football, SMU, the Southwest Conference and the 1952 Dallas Texans, which everyone's forgotten and had to leave town before the season was over because they were so awful and and became the Baltimore Colts."

But, ultimately, it's about the two men -- Dallas Cowboys founder Clint Murchison Jr. (who, 50 years ago today, was granted the NFL franchise) and AFL co-founder and Dallas Texans owner Lamar Hunt. And it's about one Fort Worth native's fascination with Dallas.

PATOSKI-Joe-Nick.jpg
Joe Nick Patoski
​"The nice way of putting it is: This is a cultural history of the Dallas Cowboys focusing on 1960 to 1979, and it's as much a cultural history of the city as the team," Joe Nick says. "The Willie Nelson book was my Texas book. Yes, it was about Willie, but also about Texas and Texans and who are these people are and what is this place. This is the next chapter. It's part of my lifelong attempt to figure out Texas and Texans, and it's been in front of my face my whole life -- growing up in Fort Worth and looking at Dallas.

"I was talking to one player's ex-wife, from Fort Worth, the other day. I said, 'Did you grow up looking at Dallas with hate?' She said, 'I loved Dallas. It had Cinerama.' This is personal. I have been trying to figure out Dallas my whole life, and sports, especially the Cowboys, are so much a part of the culture. I am making the case: America's Team, the most valuable sports franchise in the world, couldn't have happened anywhere else."

Reason I sent Joe Nick the photo is because, well, I know how much he loved the Texans. Because his book may be about the Cowboys, more or less, but I sometimes think Joe Nick wishes the Texans had remains Dallas's sole pro football franchise -- if nothing else, because they had the cooler uniforms. Hence, his decision to use Hunt and Murchison as his central protagonists.

"The book's about this great oil baron scion pissing match," he says. "Hell, yes, the book's about the Texans. And about what happened when they left. You've got one city where two sons of oil barons -- and these are two of the richest men in America -- and they grow up smitten with football and they butt heads for three years, and what a glorious time to love football. People they have these issues with Jerry, and all I can say is he may be a rich owner, but he's in the shadow of the richest owner to ever own a pro franchise, Clint Murchison. Well, and Lamar Hunt."
Posted by Joe Nick Patoski at 1:06 PM

BlueHost is definitely one of the best web-hosting company for any hosting plans you need.