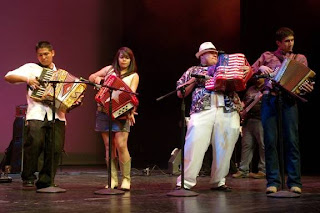 Better stretch out those bellows and get your reeds cleaned. The 2010 Big Squeeze is on with more prelim sites than ever, beginning at Casbeer's in San Antonio February 25 and running through April in San Angelo. All styles are welcome.

The details are below and at texasfolklife.org where you can also get your DVD of Hector Galan's excellent film The Big Squeeze. I get to deliver some soundbites but the main reason I'm touting it is the footage Galan shot in the Valley and in Houston at the finalists' homes. It's real folks folklife that I thought only Les Blank could shoot. Check it out

Austin, Texas – Texas Folklife announces its fourth annual “Big Squeeze” accordion contest for up-and-coming Texas musicians, 21 years of age or younger. You may have seen “The Big Squeeze” film about the contest on PBS, or seen and heard the many stories on the news and in the papers statewide about the amazing young contestants these past three years. We are looking for great players in any genre of accordion-based music, including Cajun; German, Czech, and Polish polka; Tejano, Conjunto and Norteño; Western; and Zydeco. This year the contest goes on the road to go meet the talent. Auditions will be held throughout Texas and finalists will perform at Texas Folklife’s highly acclaimed “Accordion Kings & Queens” festival at Houston’s Miller Outdoor Theatre on June 5th, 2010, where the “Big Squeeze” winner will be selected.

· Houston: March 27th at Talento Bilingue and March 28th at The Big Easy Club in partnership with the National Zydeco Foundation; and

The “Big Squeeze” is open to non-professional accordionists 21 and younger. Contestants will be judged by a panel of esteemed music professionals on song interpretation, technical skill, originality, execution, and stage presence. Interested players are encouraged to reserve an audition slot at a venue in their region by contacting Texas Folklife. Those who cannot attend an audition may also mail or e-mail their entries to arrive at Texas Folklife by April 5, 2010. The complete contest rules and entry forms are available online at www.texasfolklife.org or by calling (512) 441-9255.

Semifinalists selected from the audition and mailed in tapes will be given travel stipends to take part in the Semi Finals held on May 1st at the Bob Bullock Texas State History Museum. At that time, up to four finalists will be awarded $300 each and an expense-paid trip to Houston to compete before an enthusiastic audience of 6,000 accordion fans at the “Accordion Kings & Queens” on June 5th. The “Big Squeeze” 2010 grand-prize winner will be selected at the concert by the panel of judges with help from the audience. The grand prize winner will receive a prize package valued at $3,000, including a $1000 cash prize, travel expenses to Houston, a brand new Hohner accordion, and a day-long recording session at the historic SugarHill Recording Studios in Houston, as well as promotional support from SugarHill, Hohner, Inc. and Texas Folklife, and other professional opportunities.

“The “Big Squeeze” contest allows us to fulfill our mission to preserve and celebrate Texas culture in a very real way,” says Texas Folklife Executive Director Nancy Bless. “By supporting these young musicians we encourage them to continue playing the accordion, an instrument that is so central to Texas traditional music that it’s been dubbed, ‘the national instrument of Texas.’ It is so exciting to see a new generation carry on this heritage and to see the thrill that their mastery and extraordinary talent give to audiences.”

The “Big Squeeze” is supported by the members and Board of Texas Folklife, the City of Dallas Office of Cultural Affairs, the City of Houston through the Miller Theatre Advisory Board, the Houston Endowment, the Cogburn Family Foundation, the Still Water Foundation, the City of Austin through the Cultural Arts Division and by a grant from the Texas Commission on the Arts and an award from the National Endowment for the Arts, which believes that a great nation deserves great art. Additional support is provided by regional businesses including Hohner, Inc., SugarHill Recording Studios, Embassy Suites Hotel, and Sign Effects in Austin.

Texas Folklife is a statewide non-profit organization dedicated to presenting and preserving the diverse cultures and living heritage of the Lone Star State. For nearly twenty-five years, Texas Folklife has honored the authentic cultural traditions passed down within communities and explored their importance in contemporary society. Texas Folklife has been called “one of the state’s true cultural treasures” by the Austin American-Statesman for the accessible, joyful arts experiences we provide.

Located in SoCo just south of downtown Austin, Texas Folklife can be found next door to the Continental Club, at 1317 South Congress Avenue. For more information contact (512) 441-9255, info@texasfolklife.org or visit www.texasfolklife.org.
Posted by Joe Nick Patoski at 4:11 PM