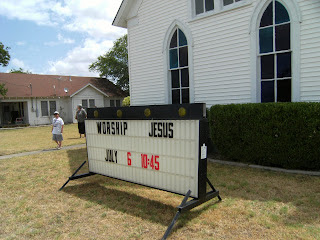 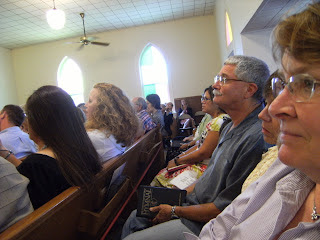 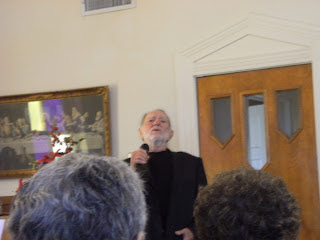 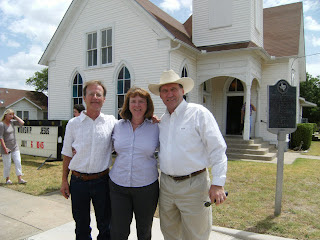 He also sang "Amazing Grace."
It was indeed a privilege to be there. Please note that it was a full-blown church service, with preaching and an offertory, not a Willie show in a church. He and sister Bobbie were there for the entire service. They didn't pull a drive by. I don't think I've ever been a part of a more moving Sunday morning. It was an honest-to-goodness country church with a sincere, straight ahead service that just happened to have Willie Nelson singing at the close. I've seen Willie in concert many times, but this is the first time I've seen him in church.
Amen!!!

It was one of the most satisfying church services I have ever attended. Sincere, and heartfelt. I consider it a privilege and a blessing to have been a part of it.

I was fortunate enough to be there and be a part of the service. I blogged about that day also. Here's an excerpt:

I've been fortunate to have many "Magic Times." The latest occurred last Sunday in Abbott, Texas. Willie Nelson and his sister Bobbie bought the Methodist Church building after the church had been disbanded and when there was a very real chance that the building would be sold and moved out of town. In the two years since, a dedicated group of volunteers have held services there twice a month, and what probably started out as a novelty for me has evolved into a sense of belonging.

Anyway, Willie and Bobbie joined us for services last Sunday. They slipped in quietly during the opening hymn. At the end of the regular service, he stood by the piano as Bobbie played, and sang "Family Bible" and another hymn, then led us all in "Amazing Grace." No huge crowds, no entourage, just a guy singing in his home church before many of the folks he'd grown up with. I sat in one of the pews later and watched him patiently greet all who wished to meet him, then watched him leave the church alone to walk the four or so blocks to his homeplace. I was stuck that strolling alone on a public street with nobody demanding his time is a luxury he is rarely given. It was a special time, a Magic Time, and I'm glad I was there.