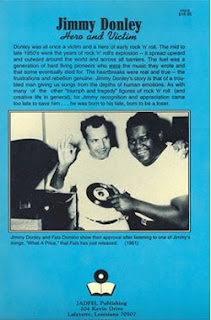 Shades of Eddie Hinton, Ed Ward does a righteous take on Jimmy Donley, the greatest, most tortured singer songwriter you never heard of, and a true master of Swamp Pop. His best known songs were "Please Mr. Sandman" "Born To Be A Loser" and "Forever Lillie Mae" although he also did a bitchin' swingin' version of "South of the Border" when he was cutting for Decca.

He was just as notorious for selling songs to Fats Domino such as "Rockin' Bicycle" and "What A Party" for a few bucks and for being successful on his second suicide attempt.

Huey P. Meaux cried telling me about Jimmy in the first interview I had with the Crazy Cajun back in 1974. I have never looked at the process of writing songs the same since. 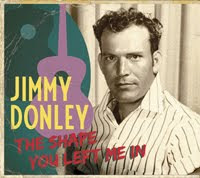 The first time I'd ever heard of Jimmy Donley was when a friend put on an album of his songs and I noted that the cover had his tombstone on it. If I'd known more about Donley, that tombstone would have come as something of a relief, because from all accounts, this was a man you didn't ever want to come into contact with. He was born in Gulfport, Mississippi, in 1929, and by his early twenties was playing bars around Biloxi, Miss. where he came to the attention of another musician, Ernie Chaffin, who had already started to record for Sun Records in Memphis, Tenn. Donley's star might have risen earlier, but just as he was making a name for himself, Uncle Sam came calling, and he went into the army, which stationed him in Panama.


Around Biloxi, they thought the army was a good idea: when Donley and Chaffin performed, sometimes Jimmy would hear someone in the audience say something he didn't like and put down his guitar and attack them. But not even the armed services could help, and before too long, Donley was back in Mississippi with a psychiatric discharge. At this point, Pee Wee Maddux, a local songwriter, arranged for Jimmy to audition with Decca Records in Nashville, and not only did they sign him, they recorded four songs immediately, in February, 1957.

Of course, there were loads of rockabilly singers out there at this point, and Decca had more than their fair share of them, but since, like most major labels at the time, they had no idea what would sell, they just threw the records out there. They probably didn't even care that Donley's accent is sometimes impenetrable, although they figured it out six months later when they had him record some country standards. After that, they left him to his own stuff, including the song he's best-known for, "Born To Be A Loser."

"Born to Be A Loser" would have been called autobiographical, if Donley had had the insights others had into him. The song's relentless self-pity has made it a swamp-pop classic, covered by others, but Donley never saw a penny. He was deeply suspicious of the contracts he signed, and preferred to get paid in cash for everything he recorded. This would have meant the loss of a few thousand dollars if Donley hadn't done something that, for the times, was astonishing: one day he walked up to Fats Domino, whose voice resembled his, and auditioned a couple of his new tunes. Fats, a very smart man, bought them on the spot. In fact, Donley and Pee Wee Maddux got close enough to Fats that they appear in the chorus on his recording of "What a Party."

It's hard to tell how many songs Donley sold outright to Fats and his bandleader Dave Bartholomew and others, including Jerry Lee Lewis, but some with the songwriting credit "Jessup" point to Rev. J. Charles Jessup, a media-savvy preacher from the Gulf Coast to whom Donley sold the rights to his output.

It goes without saying that Donley's personal life was chaotic. He was married six times, and engaged to another woman he didn't marry, for whom he wrote one of his most beautiful melodies, "Arleeta."

Donley's violence towards his wives and girlfriends is horrifying to read about, and was fuelled, unsurprisingly, by his near-constant consumption of alcohol. Yet the women kept on coming, and kept on leaving.

In 1961, Donley did some leaving of his own: he demanded a release from his contract with Decca at gunpoint and signed with Huey P. Meaux's Tear Drop Records in Houston. These, too, failed to sell, and finally, on March 21, 1963, Donley got into his car, turned on the engine, and asphyxiated himself. Next to his body was a Bible, his mother's obituary, a picture of his wife Lillie Mae, and Ernie Chaffin's phone number. It was Donley's second suicide attempt. The first time he hadn't been able to afford enough gas to succeed. And his last request, that his friend Cozy Corley sing at his funeral, was denied: Corley was black.
Posted by Joe Nick Patoski at 7:23 AM