Win Tickets: The Jimi Hendrix of the Accordion 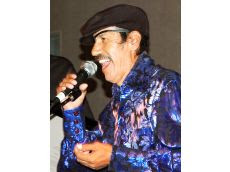 
Actually, we're almost a month too late, but still.. It's El Parche
Dig the discussion thread at the bottom. (Tip of the Hatlo hat to Casey Monahan)

>>> For your chance to win tickets to see Esteban "Steve" Jordan, the shadowy legend of Texas border music, give us your top 5 favorite songs featuring an accordion in a comment below. Winners will be selected at random and contacted via the E-mail address registered to themonitor.com. Winners must retrieve their tickets by 5 p.m. Friday at The Monitor offices on Jackson Road and Nolana in McAllen.

They call him El Parache, the accordion wizard or the Jimi Hendrix of the accordion. Jordan, a notoriously reclusive musician, has long guarded his image, refusing media interviews and photographs for years. Last year, however, Jordan overcame a bout with cancer. Afterwards, he opened up a little.

In articles and pieces by The Austin Chronicle and National Public Radio, Jordan shared bits of his life story. Born to migrant workers in Elsa, he was the youngest of 15 children. Due to his partial blindness, he couldn't work in the fields with his family, so he learned music.

Jordan is known to some as a genius. Many guess that he plays between 25 and 35 different instruments. But he has earned the most acclaim with the squeeze box. In 1982, the then-43-year-old Jordan was nominated to San Antonio's Tejano Conjunto Hall of Fame. Various other honors have dotted his distinguished lifetime.

Now nearly 70 years old, Jordan continues to play music, backed by two of his sons. On Saturday, he brings his rare, electric performance to the Valley for one night only.

Above are some of the great songs that I know of that have great accordion abuse to them. I could name more but you are only requesting 5. Hope I win so that I can see one of the greatest Icons of the accordion.
2/18/2009 10:43:31 PM