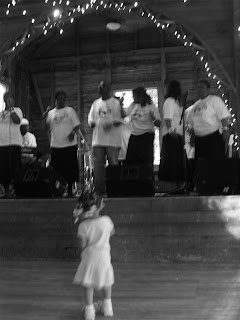 Last Saturday Kris and I threw a party and dance at Fischer Hall which included a book signing.

Fischer is an all-wood 133 year old German community dancehall with beautiful arched ribbing like an upside down ocean liner. Scenes from Honeysuckle Rose were filmed there and it's in our neighborhood, so it was the perfect setting.

It so happened to be the perfect night too, with a full moon and the spring night air still cool enough to make the open air occasion feel temperately pleasant.


The Jones Family Singers stopped by for a few spiritual songs of inspiration to open the evening on their way back to Baytown from the Old Settlers Festival up the road.

Then the band for the evening kicked into gear. Floyd Domino assembled a combo including Ernie Durawa (Charlie and the Jives, Sir Doug, Texas Tornadoes) on drums and Joe Manuel (Merle Haggard, Geo Strait) on guitar. Johnny Reno (of the Sax Maniacs, Chris Isaak, and the Barbwires) joined the ensemble on sax.

A procession of players who played with Willie over the years crossed the weathered stage: Bobby Gibson from Portland/Vancouver circa 1957, Johnny Case from Fort Worth, circa 1963, Bobby Earl Smith, circa 1973, Rick Crow, circa 1974, and, yes, Mr. Johnny Bush, who's worked with Willie on and off since 1953. With Willie and Family en route to Amsterdam, the next best thing was hearing Johnny belt out "Whiskey River" with his trademark wallop, echoing out of the open windows on a real fine night surrounded by real fine friends.

I signed quite a few books too. 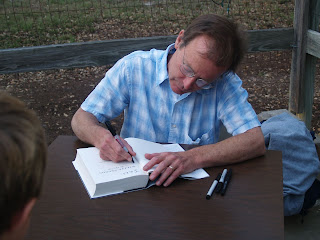 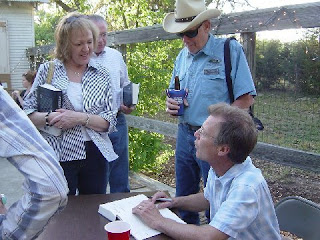 photo by J. Gillespie (Jerry Retzloff of Lone Star Beer is behind me)

Looks like a missed a helluva night - Can't wait to read your latest & see you soon - on the road again!