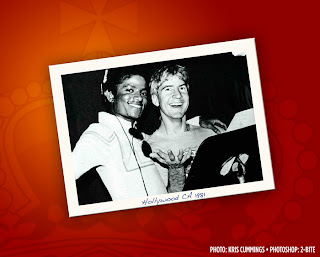 (click on the headline to read the story in Mojo)

Back in the fall of 1981, the band I managed Joe "King" Carrasco & The Crowns, signed a recording contract with MCA Records to make their second album, Synapse Gap (Mundo Total) We lived at the Tropicana Motel on Santa Monica Blvd., ate breakfast at Duke's and spend the rest of the time at Studio 55 at 5555 Melrose, right by the Paramount Studio gates. The studio was a tricked out facility with two rooms that was owned by Producer Richard Perry. The other room was booked by the Jackson family who were mixing down their live album. Over the course of the next two weeks, we got to know the Jacksons, hang with them in the rec room where the TV was, and even share some of the fried chicken their aunt had bought them.

Michael was already a star, having hit platinum with his Off The Wall album; the best selling album of all time, Thriller, would be issued in less than a year. Michael seemed like a nice guy for a twenty three year old. He was quiet, shy, and polite, not saying a whole lot except when asked. The only indication he was Michael Jackson was the Rolls Royce Bentley he drove to and from the studio. Once he had a flat about a block from the studio but summoned help by using his mobile phone, the first wireless cell phone I'd ever witnessed. Then again, there were those times I'd walk into the men's room and see MJ standing in front of the mirror, playing with his face, like he had a big zit problem, or was contemplating some alterations......

About a week and a half into the recording session, Joe "King" mused, "Wouldn't it be cool with Michael Jackson would come in and sing harmonies on 'Don't Let A Woman (Make A Fool Out of You)'?"

It was a reggae-fied tune Joe had written that sounded more than a little like "No Woman, No Cry."

Someone said to Joe, "Why don't you ask him?" So he did, and Michael said Yes.

So there he was, headphones covering his ears, trying to figure out just who was this Joe "King" character, while he professionally stepped up to a microphone facing Joe, nailing the high harmonies and making Joe sound good. Someone by the mixing board wisecracked that Joe's vocals should be mixed out of the recording so we could release a dub version of Micheal Jackson singing the song.

As it turned out, the song was mixed with both voices and released on the album and as a single which generated some airplay for a few weeks before dying (dirty little secret: MCA didn't give a shit about Joe "King" who was signed by the label as a favor from their president, a former accountant, to another accountant who was doing JKC's books; and you wonder why the music industry is dead).

I had to pay union scale for Michael on the session, and cut him a check for $100. which was cashed. The album came and went, although Joe and band did tour with the Police behind the record. Within the year, Michael would release the best selling album on all time, Thriller.

Say what you want about his music career, his personal life, his plastic surgery and his love of children and of childhood, which he didn't have much of because he was too busy working. At the heart of it all, he struck me as a nice person, cocooned in a not-so-nice business.
Posted by Joe Nick Patoski at 7:26 PM

An earlier MCA press office would have made a great deal of that.

I dealt with MCA music, and worked for McGraw-Hill Book Company.

You dealt with MCA, and work with Little Brown.

Do you agree that after the real-world, ordinary corporations in the book businees, MCA was a zoo, with child-like infighting, job fears the prevalent mood, and desperation fouling the air???

The music industry isn't dead, but the record industry has a mighty hurt.

Thanks for sharing your story! Love the song.

Great story and an awesome legacy of underappreciated music.