Some of my most personally satisfying writing over the past five years has been for No Depression magazine, which covers alt.country, Americana, and roots music more extensively than any print publication. Unlike previous employers, they let me write, and write long, which explains the 5,000 word article on the Resentments, the best Sunday night bar band you've never heard of, and the 7,000 word interview with Willie Nelson in 2004 that was the inspiration for the book I have written on Willie.

So it's with a real heavy heart to learn founders Peter Blackstock, Grant Alden, and Kyla Fairchild are folding their tent. The expense of print, the collapse of the record business as I once knew it, and the pressures of trying to make ends meet as adults finally became too much.

As Peter indicates below, they intend to continue as a web-only presence at nodepression.net but it ain't gonna be the same. I am indebted to Peter and Grant, as co-editors, and to the publication, for encouraging thoughtful writing and giving me a break when I needed one. I'm bummed that they won't be around to review the latest CD from their Artist of the Century, Alejandro Escovedo, because it's a piece of work that deserves serious assessment.

It sure was fun while it lasted. 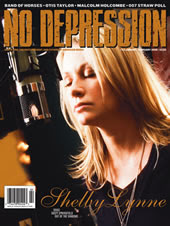 We're writing you today with heavy hearts, to let you know that the May-June issue of No Depression will be our last.

Appended below is a press release being sent to media outlets which hopefully will cover most of what led us to this decision. We've also announced it via the Hello Stranger column in the March-April issue you should be receiving shortly; the press release largely reprises that text.

Rest assured that you'll receive full payment for any pieces you've done for the March-April issue -- we'll send out checks on March 1, as usual. While our conclusion is that the magazine no longer can be financially sustainable in the future, we've not bled ourselves dry coming to that conclusion, and thus we'll leave no unpaid obligations in our wake.

We'll also be publishing one last issue with #75 (May-June), also with no change to our pay amounts or schedule. We realize many of you may wish to contribute to our swan song; just how much we'll have room to run will depend largely on whether enough advertisers feel the same way. For fairly obvious reasons, the two of us will be writing a bit more this issue than has been our norm. In general we propose to make issue #75 pretty much the same as we always have, rather than using its pages to dwell on the 74 issues which have preceded it. You're welcome to pitch stuff anytime over the next few weeks; copy deadlines for the issue will be in the area of March 20-30 (depending on the length and type of piece).

We plan to continue operating our website (nodepression.net) for the immediately foreseeable future, though the prospects of assigning new content look to be fairly limited at this time. Without question, the rates for web-only articles (after the print magazine is gone) will be reduced, as there simply is not enough web-advertising income to support nearly the (modest) size of operation we've sustained in print. And it is remotely possible that some other entity will have a better notion of how to run the business.

We'd planned, long before this decision was made in mid-February, to begin posting our review sections online a month after the magazine's on-sale date, and we may still do that. This was the primary purpose for the contracts we sent out last month, though at the time we drafted and mailed those contracts, we had no plans to shut down print operations. If for whatever reason you are uncomfortable with the contract as a result of this development, let us know and we'll be glad to void it and return it to you, and refrain from putting any of your work on our website.

It has been our pleasure working with you all these years. We'll miss the bimonthly merry-go-round of pitches and assignments, and of sharing our musical discoveries with you, and learning from those you shared with us.

NO DEPRESSION MAGAZINE
TO CEASE PUBLISHING
AFTER MAY-JUNE ISSUE

No Depression, the bimonthly magazine covering a broad range of American roots music since 1995, will bring to an end its print publication with its 75th issue in May-June 2008.

Plans to expand the publication’s website (www.nodepression.net) with additional content will move forward, though it will in no way replace the print edition.


Barring the intercession of unknown angels, you hold in your hands the next-to-the-last edition of No Depression we will publish. It is difficult even to type those words, so please know that we have not come lightly to this decision.
In the thirteen years since we began plotting and publishing No Depression, we have taken pride not only in the quality of the work we were able to offer our readers, but in the way we insisted upon doing business. We have never inflated our numbers; we have always paid our bills (and, especially, our freelancers) on time. And we have always tried our best to tell the truth.
First things, then: If you have a subscription to ND, please know that we will do our very best to take care of you. We will be negotiating with a handful of magazines who may be interested in fulfulling your subscription. That is the best we can do under the circumstances.
Those circumstances are both complicated and painfully simple. The simple answer is that advertising revenue in this issue is 64% of what it was for our March- April issue just two years ago. We expect that number to continue to decline.
The longer answer involves not simply the well-documented and industrywide reduction in print advertising, but the precipitous fall of the music industry. As a niche publication, ND is well insulated from reductions in, say, GM’s print advertising budget; our size meant they weren’t going to buy space in our pages, regardless.
On the other hand, because we’re a niche title we are dependent upon advertisers who have a specific reason to reach our audience. That is: record labels. We, like many of our friends and competitors, are dependent upon advertising from the community we serve.
That community is, as they say, in transition. In this evolving downloadable world, what a record label is and does is all up to question. What is irrefutable is that their advertising budgets are drastically reduced, for reasons we well understand. It seems clear at this point that whatever businesses evolve to replace (or transform) record labels will have much less need to advertise in print.
The decline of brick and mortar music retail means we have fewer newsstands on which to sell our magazine, and small labels have fewer venues that might embrace and hand-sell their music. Ditto for independent bookstores. Paper manufacturers have consolidated and begun closing mills to cut production; we’ve been told to expect three price increases in 2008. Last year there was a shift in postal regulations, written by and for big publishers, which shifted costs down to smaller publishers whose economies of scale are unable to take advantage of advanced sorting techniques.
Then there’s the economy…
The cumulative toll of those forces makes it increasingly difficult for all small magazines to survive. Whatever the potentials of the web, it cannot be good for our democracy to see independent voices further marginalized. But that’s what’s happening. The big money on the web is being made, not surprisingly, primarily by big businesses.
ND has never been a big business. It was started with a $2,000 loan from Peter’s savings account (the only monetary investment ever provided, or sought by, the magazine). We have five more or less full-time employees, including we three who own the magazine. We have always worked from spare bedrooms and drawn what seemed modest salaries.
What makes this especially painful and particularly frustrating is that our readership has not significantly declined, our newsstand sell-through remains among the best in our portion of the industry, and our passion for and pleasure in the music has in no way diminished. We still have shelves full of first-rate music we’d love to tell you about.
And we have taken great pride in being one of the last bastions of the long-form article, despite the received wisdom throughout publishing that shorter is better. We were particularly gratified to be nominated for our third Utne award last year.
Our cards are now on the table.
Though we will do this at greater length next issue, we should like particularly to thank the advertisers who have stuck with us these many years; the writers, illustrators, and photographers who have worked for far less than they’re worth; and our readers: You.
Thank you all. It has been our great joy to serve you.
GRANT ALDEN
PETER BLACKSTOCK
KYLA FAIRCHILD


No Depression published its first issue in September 1995 (with Son Volt on the cover) and continued quarterly for its first year, switching to bimonthly in September 1996. ND received an Utne Magazine Award for Arts & Literature Coverage in 2001 and has been nominated for the award several times (including in 2007). The Chicago Tribune ranked No Depression #20 in its 2004 list of the nation’s Top 50 magazines of any kind.

Posted by Joe Nick Patoski at 8:28 AM

ah, better googling has turned up your archive and have found the willie and resentment pieces.

It is one of a kind -- I've kept my old copies stacked in a corner; guess that's as high as it will go now.